The aim of this OSAJS was to shed new light on the diversified production of books in several Judeo languages, written about a myriad of topics, and their role in shaping generations of readers, crossing the boundaries between ‘popular’ and ‘elite’ writings. The objects of study included manuscripts and printed books from the 10th to the end of the 18th centuries—the earliest, Judeo-Arabic and Judeo-Persian books preserved in fragments in the Cairo Genizah and the latest, fruits of the dynamic printing presses in Western (Amsterdam, Italy, Germany), Central (Prague), and Eastern Europe as well as Turkey.

Project 11: ‘Philosophy in Scripture’: Jewish Philosophical Interpretation of the Hebrew Bible in the Late Medieval Period
(April to June 2022 [postponed from 2021 due to the Covid-19 pandemic])

This Seminar was inspired by recent scholarship on philosophical exegesis and Arabic translations of the Hebrew Bible among the Jewish cultures of the Islamic world in the post-Maimonidean period by young researchers worldwide—most prominently in the USA, Israel, and Germany. Its aim was to shed new light on Jewish philosophical and mystical exegesis of the Hebrew Bible from the thirteenth to fifteenth centuries.

Project 10: Towards the Study of Jewish-Buddhist Relations
(January to March 2022 [postponed from 2020 due to the Covid-19 pandemic])

This Seminar—the first in a series of International Network Seminars in Advanced Jewish Studies organised by the Oxford Centre for Hebrew and Jewish Studies, Mandel Scholion Centre of the Hebrew University of Jerusalem and the Hochschule für Jüdische Studien Heidelberg—brought together scholars of Jewish-Buddhist relations to collaboratively investigate the Jewish-Buddhist encounter throughout the ages, identify key aspects deserving further scrutiny, and develop a framework for the future study of the field. To date, Jewish-Buddhist studies had received little scholarly attention, even though the historical basis for the study of the Jewish-Buddhist relationship is strong.

This Seminar focused on Ashkenazic, Italian, Jewish and Western Sephardic musical expressions in Europe during the early modern period (excluding European Jewish communities under Ottoman rule). Special emphasis was given to the connection of liturgical, semi-liturgical and secular spheres within both composition and performance practice – hence the title “Between Sacred and Profane”. 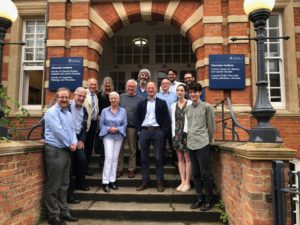 Project 8: The Mishnah between Christians and Jews in Early Modern Europe
(January to June 2019)

This Seminar brought together an international team of scholars to interpret the significance of Wilhelmus Surenhusius’ Mishnah edition in the light of two centuries of study of the Mishnah by Christians and Jews.

Project 7: Greek Expanded, Greek Transformed: The Vocabulary of the Septuagint and the Cultural World of the Translators
(January to June 2018)

The Seminar, funded primarily by the Polonsky Foundation, brought together an international team of scholars from different disciplines to work on the religious and political vocabulary of the Septuagint. It combined the expertise of the Oxford Centre with the resources of the Oxford Classics Faculty and the Faculty of Linguistics, Philology and Phonetics. The project was intended to illuminate for biblical scholars the cultural world of those who produced and read the books of the Septuagint, and to illuminate for classical scholars the ways in which Jews of the Greek world adapted to the dominant culture and influenced it in turn.

This Oxford Seminar examined the place of Jews in the liberal political culture of Europe and the USA from the first period of emancipation to the birth of the State of Israel and the postwar struggles for human rights in which Jewish activists played a prominent role. In particular, the Seminar explored the tension between the key role of Jews in constituting liberal political culture in a wide variety of contexts, and the limits and constraints imposed on Jewish political activity by the rise of modern Anti-Semitism, including their tragic climax in the Holocaust seen especially through Jewish reactions to persecutions.
Read more about the project here.

Project 5: Israel in Egypt/Egypt in Israel: the land of Egypt as concept and reality for Jews in Antiquity and the early medieval period
(January to June 2016)

This Oxford Seminar in Advanced Jewish Studies addressed a number of questions about identity and belonging among Egyptian Jews over the course of one and a half millennia. Read more about the Israel in Egypt project.

Amsterdam was the centre of Jewish printing in Europe from 1650-1800. While printers in the city served the demands of a local Jewish book market they also printed Jewish books written outside the Netherlands and later distributed all over Europe. Read more about Jewish Books in Amsterdam Seminar.

Project 3: The Reception of Josephus in the Early Modern Period
(January to June 2014)

This Oxford Seminar in Advanced Jewish Studies investigated the varied uses of the writings of Flavius Josephus in Jewish and Christian literature in the early modern period. Read more about the Josephus Seminar.

This Oxford Seminar in Advanced Jewish Studies seminar examined when and how Jews became reliable or trustworthy in the realm of the law—as witnesses, but also as lawyers and judges– and in a host of other realms, including medicine, politics, academia, culture (particularly the art world), and business and finance. Participants  focused on traditionally Christian countries or empires, but also the status of Jews under Muslim rule. The question of Jews and trust is more generally a question of Christian (or Muslim) transformation over time. Thus, the seminar provided an opportunity to explore how “the Jew” serves as a spur or impulse to large-scale changes in mentalities and practices, and to explain how this occurred within specific institutional settings: from the pre-modern world of theology and exegesis, to modern institutions like law courts, hospitals, universities, parliaments, businesses, cultural institutions such museums, galleries, and auction houses.

In this, the first Oxford Seminar in Advanced Jewish Studies, participants examined the state of contemporary Orthodox Judaism.  Within this framework the Seminar addressed the place of rational debate in contemporary Judaism, changing approaches to interpretations of revelation, the impact of gender issues, and the viability of concepts such as inclusivism, pluralism, and openness in Orthodox Judaism. Many of these topics reflect questions that were raised in the theological writings of Louis Jacobs. The research seminar provided an opportunity to bring together scholars to examine the principles and rabbinic texts upon which Jacobs built his theology.  It considered the extent to which Orthodoxy has attempted to answer the questions Jacobs posed for it over fifty years ago.

For details of the seminars, lectures and events associated with the project please see below: