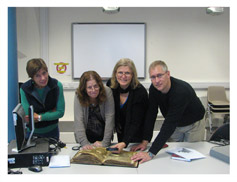 While at Yarnton during Michaelmas Term 2011, Dr Esti Eshel, Prof. Daniel Falk, and Dr. Dorothy Peters had the opportunity to study the Bodleian and Cambridge fragments of the medieval Cairo Genizah copy of the Aramaic Levi Document. This writing, originally composed in the 3rd century BCE and retelling the story of Levi and the rape of Dinah by Shechem, was particularly important for Dr Peters’ work on the “Sword in the Dead Sea Scrolls.” While she was discussing her work with the others, Dr Eshel recalled that there was a newly rediscovered but not-yet-published portion of the Aramaic Levi Document in the Rylands library in Manchester. Subsequently, the three scholars travelled to Manchester to read the fragment for themselves, finding within it important new interpretations about the sword as it used against the Shechemites together with hints about how this Jewish author of antiquity viewed the circumcision deception. Dr Eshel and Dr Peters are now producing a substantial article documenting their discoveries.

The Kennedy Leigh Visiting Fellows which programme, hosts academic researchers from Hebrew University of Jerusalem, Tel Aviv University, Bar Ilan University, and the Israel Antiquities Authority, are due to arrive in 2012.