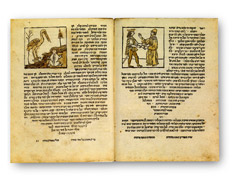 The Centre is hosting eleven Yiddish scholars from Israel, the US, Netherlands, and Germany for our annual advanced research institute. This year’s theme is devoted to the Bodleian’s collection of sixteenth century Yiddish manuscripts and books- the world’s leading collection, much of which has never been studied before. The first book printed in Yiddish was published in Cracow, 1534.

Early books in Yiddish were badly printed and few copies of many books have survived. One of the few figures to collect these objects systematically was Rabbi David Oppenheimer (1664-1736), the Chief Rabbi of Prague, whose personal library was considered the most important and magnificent Judaica collection ever accumulated. It included 780 manuscripts and 4,220 printed books in Hebrew, Yiddish and Aramaic, many of which are the only surviving copies. In 1829 the Bodleian bought the Oppenheimer Library. The Oppenheimer collection of early Yiddish books is now being systematically studied by the Centre’s Visiting Fellows in Old Yiddish.