You are here: Home / News / Portrait of a Fellow – Dr Miri Freud-Kandel 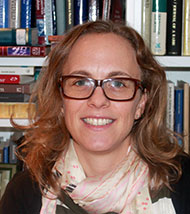 Dr Miri Freud-Kandel, the Centre’s Fellow in Modern Judaism, has been associated with the Centre since 2000, soon after she came to teach for the Theology Faculty while still a post-doctoral fellow at Cambridge. Her BA in Theology and Religious Studies from Cambridge led to a PhD thesis that was published in 2006 as Orthodox Judaism in Britain Since 1913: An Ideology Forsaken. In this she described how successive Chief Rabbis developed a form of Judaism designed to be ‘orthodox’, while responding to some of the intellectual challenges posed by the modern world. This theme has remained central to her research, and has recently given birth to a major new initiative.

After her appointment to Oxford Dr Freud-Kandel first co-edited a collection of essays entitled Modern Judaism: An Oxford Guide (2005) with Professor Nicholas de Lange. Various contributors explored the wider world of contemporary Jewish life and thought, and she herself provided papers on British Jewry and Modernist Movements of Judaism. She was also teaching in the faculties of Theology and Oriental Studies, and supervising DPhil students in the field of modern Jewish thought. She is intrigued by how this contemporary, living religion produced various denominations while accommodating new identities and responding to pressures such as feminism and the theologies emerging from the Holocaust and Zionism. Most such ideas can be traced back to eighteenth- and nineteenth-century thinkers such as Mendelssohn, Hirsch and Geiger; or to later writers like Louis Jacobs or Eugene Borowitz; or even to the more contemporary David Hartman, Judith Plaskow and Tamar Ross. Precisely how this has occurred is the subject of her research so far.

Her current project is convening a six-month-long Oxford Seminar in Advanced Jewish Studies entitled ‘Orthodoxy, Theological Debate and Contemporary Judaism: A Critical Exploration of Questions Raised in the Thought of Louis Jacobs’. This began in January with a public symposium at Yarnton Manor, entitled ‘Orthodox Judaism and Theology in the Twenty-first Century’. Various lectures will also be held in Oxford and in London over the coming months, but the fifteen or so participants who will be based at the Centre over the next six months will meet mostly in small working seminars to propose, explore and refine new ideas.

This international group of scholars has been drawn to the Centre by the opportunity to pursue the central theme with a variety of disciplinary approaches – historical, legal, sociological and theological – and hope to break new ground in research on contemporary Orthodox Judaism. Central issues to be analysed are Orthodoxy’s openness to ideas, to other Jews and to society at large, which will be approached via rabbinic texts and writings deployed to defend traditional practices and introduce new ones. The Seminar will address the place of rational debate in modern Judaism, especially concerning interpretations of revelation, gender issues and religious pluralism both within Judaism and in relation to other faiths. The writings of Louis Jacobs will provide a starting point for exploring some of these discussions, and will allow one to see how theology can be constructed, and how it is influenced by the context in which it develops.

Dr Freud-Kandel was delighted by the large number of colleagues eager to participate and by the generous donors who agreed to fund the project – the Polonsky Foundation, the Dorset Foundation and the Kennedy Leigh Charitable Trust. The project at first took a fairly limited form, designed to investigate Louis Jacobs’s life and works. Oxford seemed a natural location for the project since Louis Jacobs left his library to the Centre, where much of his personal archive is also now housed.

This small beginning soon expanded into a more general examination of issues he raised over fifty years ago. Many of these have remained central to contemporary concerns, and continue to determine the future of contemporary Judaism, as thinkers tussle with understandings of revelation, the changing roles of women, and new challenges connected with approaches to conversion, gender and relations to other Jews and different faiths.

Dr Freud-Kandel is particularly interested in the disinclination of orthodoxy to engage with modernity in systematic ways. The great Chief Rabbi Abraham Kook and Rabbi Joseph Soloveitchik attempted to outline Jewish responses to aspects of contemporary thought, but did so unsystematically and without attempting to appeal to the general public. Chief Rabbi Joseph Hertz set out to construct a theology, but addressed a readership that lacked specialized knowledge. Chief Rabbi Lord Jonathan Sacks has similarly suggested that Jews in general ‘prefer talking to God than about Him’.

Dr Freud-Kandel developed the theme of the Seminar in collaboration with Dr Adam Ferziger of Bar-Ilan University, who has published a major study of German-Jewish intellectual history entitled Exclusion and Hierarchy: Orthodox Non-observance and the Emergence of Modern Jewish Identity. They began by compiling a ‘dream-list’ of participants for the research seminar and opening symposium, and were astonished when most of them accepted the invitation to join the team. These include Professor James Kugel who specializes in approaches to reading the Bible, Professor Tamar Ross who focuses on feminism and critical approaches to Bible, Professor David Weiss Halivni who has framed a critical approach to scriptural and rabbinic writings, Professor Moshe Idel who is a leading expert on Kabbalah, Rabbi Professor Daniel Sperber who has written on the development of law and custom, and Professors Chaim Waxman and Samuel Heilman who are sociologists of Orthodox Judaism. These are only a few of the major figures from a variety of fields who will participate in the Seminar. The opening symposium included three ‘Israel Prize’ laureates, the most prestigious Israeli award for academic distinction. Many of the scholars had not previously worked in Oxford, which has now become a location for debate of the future direction of Jewish thought.

The work of the Seminar will culminate in the publication of academic papers outlining findings that will provide a springboard for further developments in the field.

Dr Freud-Kandel notes that the Seminar has also begun to provide a neutral academic space for communal figures and academics from London to meet and develop contacts informally. This is an aspect of the Seminar whose long-term effects are not easily quantifiable, but whose impact promises to be lastingly valuable.