You are here: Home / News / Oxford Seminar in Advanced Jewish Studies on ‘Orthodoxy, Theological Debate and Contemporary Judaism: A Critical Exploration of Questions Raised in the Thought of Louis Jacobs’

The Oxford Seminar on ‘Orthodoxy, Theological Debate and Contemporary Judaism: A Critical Exploration of Questions Raised in the Thought of Louis Jacobs’ opened with an international symposium focused on ‘Orthodox Judaism and Theology in the Twenty-first Century’. It was introduced by Dr Miri Freud-Kandel from Oxford and Dr Adam Ferziger of Bar-Ilan University, in the Long Gallery at Yarnton Manor, and brought together some leading figures in Judaic studies in the world. They included three Israel Prize winners, as well as a broad range of other scholars.

The Long Gallery was packed by people who had travelled far to hear Professor David Weiss Halivni give an open public lecture on the question: ‘Is the Critical Method Compatible with Orthodoxy?’ While Professor Halivni argued that an awareness of textual variations between different versions of the Talmud could significantly aid interpretation of these texts, he expressed concern from the perspective of Orthodoxy about applying his methodology to biblical texts. Nonetheless, the following day began with a session devoted to the question of Orthodox Judaism and the Bible. Speakers in this session were Professors James Kugel, Tamar Ross, Alan Brill and Joshua Berman, and discussion ensued regarding different approaches that could be adapted to understandings of revelation and law, and changes that can be identified in both of these concepts. This session provoked considerable discussion, including a questioning of the place of theological debate in Orthodoxy and the relationship between biblical scholarship and theology. 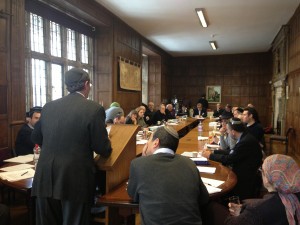 The next session, which had more of a sociological and anthropological emphasis, opened with the suggestion that having discussed God, it made sense to consider some of the human issues affecting communal Jewish life for contemporary Orthodoxy. Professor Samuel Heilman laid out his rather pessimistic assessment of how Orthodox Judaism continues to face an alarming shift to the religious right, posing questions for the future of any type of Modern Orthodoxy. Professor Sarah Benor described the religious spectrum that exists within Orthodox Judaism and considered how this removes the scope for acknowledging the religious diversity that exists beyond the Orthodox circle and that is contributing to redefinitions of the concept of Klal Yisrael. Professor Daniel Sperber addressed the question of the scope for halakhic change in Orthodox Judaism if it is to be equipped to address current cultural and social issues. He argued that there is far more flexibility possible than contemporary experience would suggest and he levelled a critique at those Orthodox figures who selectively oppose all innovation in communities outside their own.

The final session examined the spiritual life of twenty-first century Orthodox Judaism and the growth experienced in some sectors, where the desire for rational presentations of Judaism is diminishing. Much as Samuel Heilman had addressed the growth of Haredi Judaism, Professor Moshe Idel offered a more positive assessment of how varying types of Hasidic Judaism are likely to become increasingly dominant and assessed the novelty of Chabad as a Haredi Hasidic movement that sought to connect to all sectors of the Jewish community. Other speakers in this session were Professors Ron Margolin and Ada Rapoport-Albert, whose papers included an examination of both the rejection of women’s participation in Chabad and increasing recognition of the need to find a place for them, a development that helped highlight the significance of gender in any study of contemporary Orthodox Judaism.

The formal symposium was followed by a more informal weekend programme in which lively discussion continued and contacts were made between scholars that have led to ongoing discussion. A real sense of excitement was generated about the future work of the research programme. The first in a series of public events in London followed, to another packed audience. A public session at Jewish Book Week was also sold out, and there was an afternoon and evening of lectures on 10 March. In the meantime, the visiting fellows will continue their work at Yarnton through the Hilary and Trinity terms.