You are here: Home / News / Louis Jacobs in Yarnton

23 January 2013 saw the opening of the exhibition We Have Reason to Inquire: The Life and Works of Rabbi Dr Louis Jacobs. It coincided with the start of the Oxford Seminar in Advanced Jewish Studies, on the topic of ‘Orthodoxy, Theological Debate and Contemporary Judaism: Exploring Questions Raised in the Thought of Louis Jacobs’. The Exhibition Team gave an introductory talk, and this was followed by the David Patterson Seminar given by Professor David Weiss Halivni, ‘Is the Critical Method Compatible with Orthodoxy?’, which inaugurated the Seminar.

Thanks to the good offices of the former Fellow Librarian, Dr Piet van Boxel, Rabbi Dr Jacobs gave his library to the Leopold Muller Memorial Library. The Louis Jacobs Library came to join the Elkoshi, Kressel, Coppenhagen and Foyle-Montefiore collections – the result being that the Centre owns one of the great European Rabbinic libraries. In honour of the Seminar dedicated to Rabbi Jacobs’ thought, the Jacobs family generously lent the Library a considerable part of the Louis Jacobs Archive, comprising correspondence with family, congregants, rabbis and scholars from the United Kingdom and abroad; manuscripts of Rabbi Jacobs’ articles and books, notes made by him for his responsa, publications and sermons; family memorabilia, and press-cuttings detailing Rabbi Jacobs’ activities and the controversies around him. 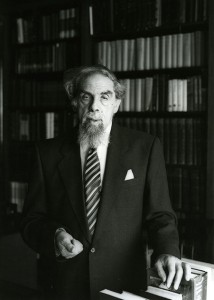 Chosen in a poll of Jewish Chronicle readers as the greatest British Jew ever, Louis Jacobs was a scholar with wide-ranging interests in Jewish Studies, including Theology, Law, Kabbalah, Hasidism and Liturgy. At the same time he was a practising rabbi, and this was a role he never relinquished, and into which he seems to have put much of his not inconsiderable energies.

The purpose of the Exhibition is to show aspects of Louis Jacobs’ thought that have received less public attention amid the controversies aroused by his activities as a rabbi and theologian, as well as giving a detailed introduction to his life. With that in mind, the team, consisting of César Merchán-Hamann, Milena Zeidler, Jane Barlow and Zsófia Buda, decided to concentrate on highlights of Rabbi Dr Jacobs’ engagement with the challenges that modernity presents to traditional Orthodox Jewish life. The main source is the Archive on loan to the Library, but the Library collections have also been used, primarily the Louis Jacobs Collection. 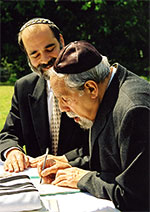 The broad themes dealt with are Louis Jacobs’ biography, his intellectual background as a rabbi and as a theologian, as well as the scholarly network which gave him support and constructive criticism. More specific themes include his conception of Jewish theology and his theology of revelation, which gave rise to what was called the ‘Jacobs Affair’ and led to the formation of the Masorti Movement in the United Kingdom. There is also the question of his attitude to Jewish marriage and to conversion to Judaism, with all that this entails for the life of the Anglo-Jewish community in terms of the Jewish status of those who either convert to Judaism or are married according to the customs of non-Orthodox varieties of Judaism.

The Exhibition will be open at the Leopold Muller Memorial Library until October 2013, Monday to Friday, 9 am to 5 pm. A digital exhibition is available on the Library’s website, and includes many items for which there was insufficient room at the Library. The Exhibition Team wish to thank all those who have made the exhibition possible, first and foremost Mr Ivor Jacobs and the Friends of Louis Jacobs.