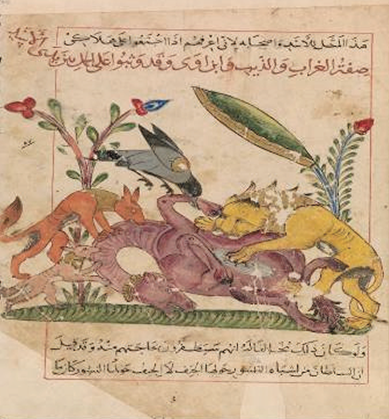 When Piet van Boxel, then Curator of the Bodleian Library’s Hebrew Collection and Director of the Centre’s Muller Library, mounted ‘Crossing Borders: Hebrew Manuscripts as the Meeting Place of Cultures’ in 2008 in Oxford, he assembled a display of some of the world’s most important Hebrew manuscripts.

The manuscripts in this exhibition exemplify the collaborative efforts of Jewish scribes and Christian illustrators in the production of Hebrew prayer books in the thirteenth century, the continuous influence of Jewish Bible commentators on Christian theologians throughout the Middle Ages, and the influence of Islamic art, philosophy and science on Jewish scholars from the tenth through to the thirteenth century. The exhibition challenges our assumptions about Jewish-Christian and Jewish-Muslim relations by showing a more nuanced narrative of mutual influence, collaboration and interaction.

The exhibition includes such gems as Maimonides’s own handwritten manuscript of his Mishneh Torah and the magnificently illustrated fifteenth-century Kennicott Bible, the most lavishly illustrated medieval Hebrew Bible produced in Spain.

When David Ariel, President of the Oxford Centre for Hebrew and Jewish Studies, saw the exhibition, he commented, ‘This exhibition, more than anything else, clearly illustrates the unique role of the University of Oxford in preserving the European and Mediterranean Jewish legacy. While more than 100 million books were destroyed by the Nazis, the University of Oxford was instrumental in preserving the Jewish legacy more fully than anywhere else in the world.’

Following the initial exhibition, the Centre has worked with the Bodleian Library to bring it to the United States in order to introduce Oxford’s unique role in preserving the Jewish heritage to North America. The Centre brought together the Bodleian Library and the Jewish Museum in New York, the leading Jewish museum in the United States, for an exhibition of ‘Crossing Borders’, from 14 September 2012 to 4 February 2013.

The exhibition opened to a rave review in the New York Times which said: ‘One of the most beautiful objects here — the show’s centerpiece — is the 922-page Kennicott Bible, “the most lavishly illuminated Hebrew Bible” to survive from medieval Spain. It was completed in 1476, less than 20 years before the expulsion of the Jews, and is so elaborate it almost undermines itself, a sacred text more enticing for its decoration and its encyclopedic embrace of Islamic, Christian and folk styles than for its content. Its entire text has been scanned and put online by the Jewish Museum; each of its pages can also be examined at the exhibition on a sequence of mounted iPads.

Other examples of transformations of religious symbols are fascinating. Three manuscripts here display a common Christian motif in 15th-century Italy: the Virgin with a unicorn on her lap, defending it from a hunter. The unicorn had become a symbol of Christ, so the image was an allusion to the Incarnation. But even seemingly secular images of unicorn hunts could be seen as allegories of persecution. With its status as a targeted innocent, the unicorn also became a Jewish symbol, the hunt invoking another kind of persecution.

So when the first page of an elaborately illustrated 1472 Hebrew Bible from Italy includes an image of a woman with a unicorn, as well as an image of Adam and Eve about to eat from the forbidden tree, how is this to be interpreted? This is a manuscript with a considerable scholarly “apparatus,” including commentary and readings, meant, we are told, for a synagogue. Was a Christian illustrator of the Hebrew text engaging in a subtle polemic? Or had the symbols become so bipolar they could sustain incompatible meanings?…

The final gallery here … begins to put the collection itself in context: how English Protestants in the late 16th century established Hebrew as a central subject for study. Thomas Bodley, a Hebraist and humanist, re-established a library at Oxford that had been plundered and provided the foundation for its renowned holdings.’

The Bodleian Libraries have made available an online display – http://www.bodleian.ox.ac.uk/bodley/about/exhibitions/online/crossing-borders

For more information on events around the New York exhibition, including gallery talks and musical performances, go to thejewishmuseum.org

The Centre and the Bodleian Library hosted a reception at the Jewish Museum on 3 October for 300 guests. The exhibition is part of the Centre’s plan to introduce Jewish studies at the University of Oxford to North American audiences.