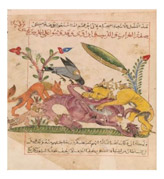 The Centre and the Bodleian Library have partnered a project to bring an exhibition of the Bodleian’s Hebrew manuscripts to the Jewish Museum in New York. The exhibition, called ‘Crossing Borders: Hebrew Manuscripts as the Meeting Place of Cultures’, will be held from September 2012 to the end of January 2013.

The Centre and the Bodleian will host an opening event and conduct joint fundraising in New York. A New York host committee is being formed.