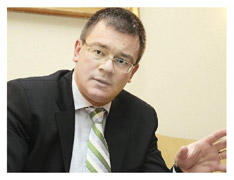 Dr Mihai-Razvan Ungureanu, a graduate of the Centre’s One-Year Programme in Jewish Studies, was recently appointed Prime Minister of Romania. He came to the Centre in 1992 in order to discover more about the role of Jews and Judaism in Romanian society during the 18th and 19th centuries.

He became deputy foreign minister in the late 1990s, and subsequently foreign secretary and director of foreign intelligence, before recently being invited by the President of Romania to form a government. He has written and published widely on political affairs, and in the context of his work as a popular Professor of History at his University of Iasi.